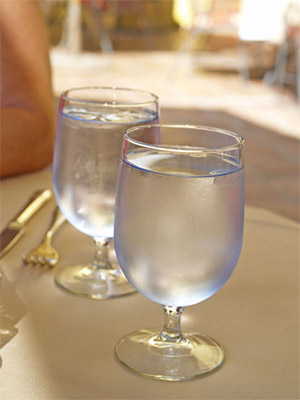 To learn about water conservation and tips on how to use water wisely, please visit our Use Water Wisely page.

From Source to Tap
The safety of the Nation’s drinking water is largely due to the introduction of disinfection at the start of the 20th century, which eradicated serious and life-threatening diseases such as cholera and typhoid fever. However, the safety of the Nation’s drinking water supplies continues to be challenged by microbiological pathogens and chemical substances found in source waters. The key to protecting health and providing safe drinking water to the public is accomplished by a multi-barrier approach. This strategy involves three broad areas:

Source Water Protection – Since drinking water comes from natural sources in the watershed (groundwater, rivers, lakes, etc.), it is important to maintain the quality of the watershed. Although most water requires some treatment before use, protecting this source water from contamination is an important part of providing safe drinking water to the public. Protecting drinking water sources usually requires the combined efforts of many partners such as public water providers, community, watershed protection groups, governmental agenices and the public.

Drinking Water Treatment – Water is made safe to drink by applying management and engineering practices to remove impurities and maintain water quality to the customer’s tap. In order to safeguard public health, it is important that treatment systems be designed and constructed based on the results of source water assessments. Assessments and designs are regularly reviewed and upgraded as necessary. Items considered in designing effective treatment systems include: the quality of source water to be treated, available treatment processes, treatment components (including redundancies), equipment design, chemicals use, treatment efficiency, and monitoring procedures. To learn more about drinking water treatment visit our Drinking Water Treatment Processes (see below).

Monitoring and Testing – The safety of drinking water is established through compliance with regulatory requirements under the Safe Drinking Water Act. Comprehensive, scientifically defensible, and achievable performance standards, based on recognized principles, are essential to ensuring the efficacy and reliability of treatment technologies. For more information about drinking water quality please visit our website Drinking Water Quality page.

Black Lakes
The District operates Black Lakes 1 and 2. Both are located near Vail Pass. These lakes deliver water during low flow periods to the Black Gore and Gore Creeks, Eagle River and eventually to the Colorado River.

The Eagle River Water & Sanitation District (District) and the Upper Eagle Regional Water Authority (Authority) treat both groundwater and surface water sources to provide safe, reliable drinking water for our communities. Groundwater sources are of high quality in the Eagle River and Gore Creek watersheds and therefore require minimal treatment. Surface water typically requires more treatment in order to remove impurities introduced through atmospheric deposition and run-off from storm events and snowmelt. The District and Authority use a variety of drinking water treatment processes most effective for the type and quality of the source waters treated.

Screening: Large debris such as sticks, leaves and trash are screened out and removed during this first step of the pretreatment process.

Ozone Treatment:
Ozone is used to deactivate bacteria, viruses and other pathogens present in source water. It also increases the efficiency of the coagulation process and helps to reduce the concentration of metals and undesirable compounds that can form during the disinfection process.

The coagulation, flocculation and sedimentation step of water treatment is a clarification process that works through the use of coagulants (chemicals which effectively bind small suspended particles to one another) to form larger particles, called floc, which can be settled and filtered out of the water. The joining of these particles to form larger settleable particles is called flocculation and occurs in the flocculation basin. The amount of coagulant needed for this process varies throughout the year and depends on the quality of the source water treated.

Water exiting the flocculation basin enters the sedimentation basin, also called a clarifier or settling basin. A layer of sediment, or sludge, is formed on the bottom of the basins as the particles settle out. The amount of sediment generated is often significant and can range from 1 to 3 percent of the total volume of water that is treated. The sediment layer is removed from the basin and sent to a wastewater treatment facility for treatment.

After separating and removing floc, the water is further treated to remove any remaining suspended particles and microorganisms. This is accomplished by filtering the water through gravel, sand and anthracite coal filters. This treatment step combines both physical and chemical processes to remove impurities.

Backflushing, or backwashing, is a water reclamation process used to remove embedded particles in the filter. Reclaimed water containing backwash, or contaminated water, is returned to the beginning of the treatment process to be treated with raw source water. This reduces flows to the wastewater plant as only the settled sludge from this process is sent to the wastewater plant.

Disinfection is the last step of the drinking water purification process. Chlorine, the disinfection agent, is added to the water to destroy any remaining pathogens. Bacterial re-growth is prevented by ensuring that a chlorine residual is maintained throughout the drinking water distribution system.

Fluoride is added to drinking water at various locations within the District and Authority service areas. Fluoridation is considered an effective means toward helping prevent tooth decay.

Microfiltration Water Treatment:
Microfiltration removes contaminants from water by filtering them through a microporous membrane. Microfiltration membranes were first introduced to the municipal water treatment market in 1987 and applied primarily to waters that were relatively low in turbidity (a measure of water cloudiness caused by the amount of suspended matter in the water). These were typically cold, clear source waters. Low pressure membranes were selected to remove turbidity spikes and pathogens without chemical conditioning. As low pressure membranes became more widely accepted, users began to apply this technology to water that contained more solids and higher levels of dissolved organic material. Recent developments in this technology have included both pre and post treatment to optimize the process.

Microfiltration effectively removes major pathogens and contaminants such as Giardia lamblia cysts, Cryptosporidium oocysts, and large bacteria. Membranes have a fixed pore size and remove particles by straining. These membrane units are compact and high in surface area, thereby reducing the overall footprint of treatment facilities. The Edwards Drinking Water Facility is a microfiltration plant that also uses coagulation to reduce the level of organics, taste and odor compounds and occasional color that can result from algal blooms in source water. The Gore Valley Drinking Water Facility (also a microfiltration plant) does not need coagulation for treating its source water.

The District and Authority provide drinking water to customers in Vail, EagleVail, Arrowhead, Avon, Beaver Creek, Bachelor Gulch, Edwards and Cordillera. Drinking water is provided to customers via a complex network of pipes, tanks and pumping stations called a distribution system. The District’s system consists of seven groundwater wells and one treatment facility – the Gore Valley Drinking Water Facility. The Authority’s system consists of ten groundwater wells and two treatment facilities – the Avon Drinking Water Facility and the Edwards Drinking Water Facility. An interconnecting pipeline connects the District’s and Authority’s systems and allows for water transfer between Vail and the communities west of Vail.

The District and Authority are staffed 24 hours per day, 365 days per year by Water Treatment Operators certified by the State of Colorado under Environmental Protection Agency (EPA) Guidelines.

Groundwater Wells
Vail is primarily served by seven groundwater wells varying in depth from 70 to 200 feet which operate year-round. Combined, they produce approximately 1 billion gallons of drinking water per year.

The Authority system operates ten groundwater wells on a seasonal basis to serve the needs of the communities west of Vail. Well depths vary from 60 to over 500 feet and supplement the surface water sources within the Authority. These wells also provide drought protection for periods of lower flows in the Eagle River.

Gore Valley Drinking Water Facility
This facility was built in 1968 as a conventional treatment plant. It was converted to a microfiltration plant in 2002 and is capable of producing 1 million gallons of water per day. The raw water source for this facility is the Black Gore Creek. This facility was upgraded in 2008 with low pressure membranes.

Avon Drinking Water Facility
This facility was built in 1985 and expanded in 1996 from a 5 to a 10-million-gallon-per-day-plant, which operates year-round. The raw water source for this facility is the Eagle River.

Edwards Drinking Water Facility
This facility was built in 2001 and is a state-of-the-art 5-million-gallon-per-day microfiltration plant, which operates year-round. It is equipped with an irrigation system, which is capable of supplying untreated water to the nearby community for the non-potable uses. The raw water source for this facility is the Eagle River

Distribution System
The District’s Distribution and Collection (D&C) Division is responsible for the operation and maintenance of the pipes (mains), storage tanks and pumps that convey water from water treatment facilities to customers.
These activities include:

The D&C Division is faced with many operational challenges associated with the highly variable terrain found in mountains. For example, the District operates and maintains 73 different pressure zones. This requires 41 booster pumps stations (BPSs) which transfers water to 46 water tanks throughout the service area.

The D&C Division manages approximately 240 miles of distribution mains for the service area which extends from East Vail to Wolcott and includes activities associated with the following: