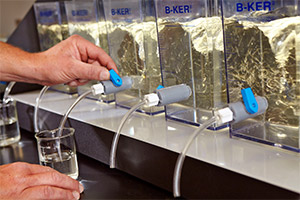 The Eagle River Water & Sanitation District and the Upper Eagle Regional Water Authority are public water systems regulated under the Environmental Protection Agency’s (EPA) Safe Drinking Water Act (SDWA). Congress passed the SDWA in 1974 to protect public health in the United States by regulation of public drinking water supplies. The Act authorized the EPA to establish safe standards of purity and required all owners or operators of public water systems to comply with primary (health-related) standards. The SDWA has strict regulations for monitoring, reporting, and customer notification in the event of a violation of drinking water standards. The SDWA is enforced by the Colorado Department of Public Health and Environment.

The District and Authority are committed to providing safe, reliable, and affordable drinking water to their customers. Efforts are continuously made to protect and improve source water, keep current with and use advanced drinking water treatment technologies, and use innovative approaches for the management of water operations and water resources. Overall, the District and Authority strive to effectively integrate drinking water source protection, treatment, and distribution in order to protect public health and the environment. On an annual basis, public water systems must provide a Consumer Confidence Report (CCR), which details the quality of their drinking water. For more information about your drinking water, see Understanding My Drinking Water (below) and the ERWSD or UERWA CCR (below).

Drinking Water Sources The Eagle River Water & Sanitation District and the Upper Eagle Regional Water Authority are fortunate to have numerous high quality natural water sources for drinking water. The water that is treated from sources open to the atmosphere (such as rivers, lakes and reservoirs) is known as surface water. Water pumped from wells drilled into underground aquifers – geologic formations containing water – is called groundwater.

Common Sources of Pollution
The water from surface and groundwater sources undergoes drinking water treatment. Drinking water treatment removes microbes, metals and other chemical contaminants that occur both naturally and through human activities, so that all drinking water complies with strict Federal standards. Generally, surface water systems require more treatment because they are exposed to the atmosphere and runoff from precipitation and melting snow. Natural waters can contain microorganisms from wildlife and soils, radionuclides from underlying rock, nitrates and nitrites from nitrogen compounds in the soil, heavy metals from underground rocks containing arsenic, cadmium, chromium, lead and selenium, and fluoride. Human activities contribute contaminants such as bacteria and nitrates from human and animal waste and septic tanks, heavy metals from mining constrution, fertilizers and pesticides from golf courses and parks, industrial products and wastes from gas stations, leaking underground storage tanks, major highways, household waste from cleaning solvents and petroleum products such as used motor oil, paint, paint thinner, and treatment chemicals from wastewater treatment plants.

Law Governing Safe Drinking Water
Public water providers like the District and the Authority are regulated by the Environmental Protection Agency (EPA) under the Safe Drinking Water Act (SDWA). Congress passed the SDWA in 1974 to protect public health by regulating the nation’s public drinking water supply and protecting sources of drinking water. In Colorado, the Colorado Department of Public Health and Environment, under the guidance of the EPA, administers the SDWA.

It is reasonable to expect that drinking water contains at least small amounts of some contaminants. As discussed above, public drinking water is regulated under the SDWA, which establishes limits for contaminants. Some people may be more vulnerable to contaminants in drinking water than the general population. People with compromised immune systems and pregnant women and their fetuses can be particularly at risk for adverse effects.

If you have special health care needs, consider taking additional precautions with your drinking water and seek advice from your health care provider. For more information visit the U.S. Environmental Protection Agency website.

Household Wells
While the EPA regulates public water systems, it does not have the authority to regulate private wells. For more information about ensuring the protection and maintenance of private wells, visit the EPA website or call the Safe Drinking Water Hotline at 800-426-4791.

The Eagle River Water & Sanitation District 2020 Consumer Confidence Report details the quality water and services we deliver to you every day and covers the monitoring period of January 1 to December 31, 2020, for the public water system that serves the town of Vail.

Federal regulations require that this report be distributed to District water customers. It is mailed to all customer accounts by June 30 of each year and made available here to reach non-bill-paying consumers. The water quality testing results shown in the report are only the detections found during the monitoring period, which result from thousands of water quality tests that are performed over the course of any year.

Please contact Customer Service at 970-476-4780 with questions about this report.

The Upper Eagle Regional Water Authority 2020 Consumer Confidence Report details the quality water and services we deliver to you every day and covers the monitoring period of January 1 to December 31, 2020, for the public water system that serves the town of Avon and the metropolitan districts of Arrowhead, Bachelor Gulch, Beaver Creek, Berry Creek, Cordillera, EagleVail, and Edwards.

Federal regulations require that this report be distributed to Authority customers. It is mailed to all customer accounts by June 30 of each year and made available here to reach non-bill-paying consumers. The water quality testing results shown in the report are only the detections found during the monitoring period, which result from thousands of water quality tests that are performed over the course of any year.

Please contact Customer Service at 970-476-7480 with questions about this report.

Water hardness represents the total concentration of calcium and magnesium ions and is expressed as milligrams per liter (mg/L) of calcium carbonate. Calcium and magnesium are naturally occurring elements within geological formations found throughout watersheds and are also found in surface and groundwater sources. “Ideal” water hardness for drinking water ranges between approximately 50 to 100 mg/L. Above this level, hardness can contribute to scaling of water heaters and boilers. Water with hardness below this level tends to be more aggressive and can cause deterioration of the inner surface of pipes, eventually leading to pinholes or leaks.

Water softeners are used to treat excessive hardness of tap water. Most people choose to install softeners because they prefer the benefits of “soft” water: soap tends to lather more easily, there are fewer spots on dishes, and detergent needs are decreased overall. An advantage of hard water is that, within certain limits, it tastes better. Many of the water softeners installed today are flow-through systems, which remove all hardness. Water that lacks any hardness is considered aggressive and can cause pipe problems over time due to corrosion. One way to avoid this problem is to install a small line with ball valves in the plumbing that allows some water to bypass the softening system. A water hardness test kit can be purchased at most local home improvement centers and can be used to set the water softening system to the appropriate level (50-100 mg/L). This will give the benefits of softer water, and help the homeowner avoid problems associated with completely softened or zero hardness water.

The Vail Valley has seasonal drinking water sources and, as a result, hardness levels can vary over the course of the year. For instance, when groundwater is the main drinking water source, the tendency is to find higher hardness levels due to high contact duration with above and underground mineral deposits. When surface water is the source, hardness levels can fluctuate due to the dilution of river water by snowmelt and rainfall events as well as less contact with soil minerals. Generally speaking, surface water is softer than groundwater.

Hardness in the District’s treated drinking water ranges between 160 and 350 mg/L with an average of about 250 mg/L.

Hardness in the Authority’s treated drinking water ranges between 50 and 380 mg/L with an average of about 120 mg/L. 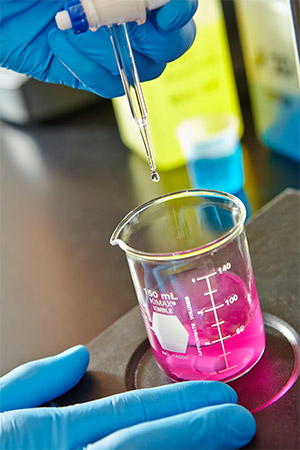 The Eagle River Water & Sanitation District (District) Laboratory is certified by the State of Colorado to perform bacteriological testing of drinking water as well as other testing. Coliform bacteria in water (total and E. coli) are tested in accordance with requirements of the Safe Drinking Water Act.

Total Coliform bacteria are a class of bacteria commonly found in the environment. E. coli is an organism found in animal and human waste. The presence of E. coli in drinking water may indicate contamination of the water supply. Public water providers are required to have treated drinking water tested for coliform bacteria on a regular basis. The Environmental Protection Agency recommends people drinking from private wells have their water tested for Total Coliform and E. coli on an annual basis.

For more information about bacteriological tests on drinking water, please call the District Laboratory at 970-477-7915.

For information on other water quality issues, please see the FAQ section.