In light of additional reports of a similar odor near Nottingham Lake in Avon, please see the updated information on alpine pond odors at the bottom of this page.

Media Coverage: Read a story in the Vail Daily and listen to a radio interview on KZYR.

The Eagle River Water & Sanitation District has received numerous calls about an odor in the Miller Ranch area in Edwards. The district has explored possible causes for the odor related to its operations, including checking manholes throughout Miller Ranch, The Reserve, and along U.S. Highway 6 each day this week, and has not found any backups or overflows in the wastewater collection system. Additionally, district staff took samples Thursday (3/23) morning from multiple points in the sewer main beneath U.S. Highway 6 between Avon and Edwards to analyze them for odor compounds. 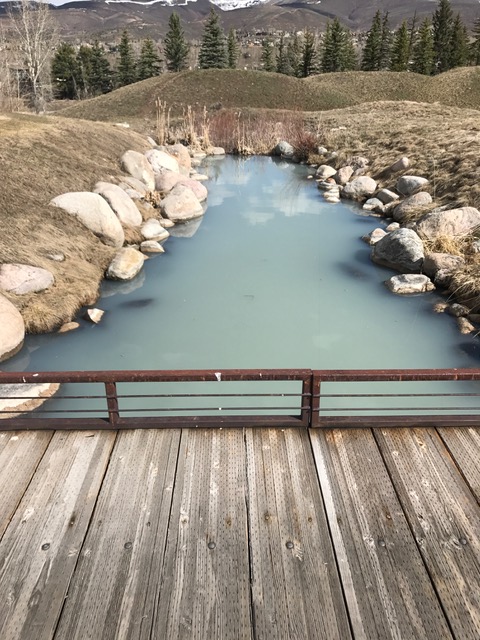 Due to reports of particularly strong odors on Thursday morning, district staff continued to investigate other odor sources including private sewer lift stations located in nearby developments – which were found to be in good working order – and area ponds and waterways. A pond located south of U.S. Highway 6 and east of the Arrowhead Drive west entrance was found to be discolored, with dead fish – and was emitting a strong odor. District staff notified Arrowhead and Country Club of the Rockies representatives of the issue in the pond.

Alpine pond odors may occur from a natural phenomenon called oxygen depletion, which is caused by seasonal variations in the dissolved oxygen in pond water. During summer and fall months, oxygen is added to the water through stream or irrigation ditches, wind, and photosynthesis by aquatic plants and algae. Over the winter, these oxygen sources slow, and the dissolved oxygen level drops to a degree in which plant and animal life may die off. Subsequent bacterial action further draws oxygen from the water, creating hydrogen sulfide gas which smells like rotten eggs. As winter transitions to spring, the pond may “turn over”–the foul-smelling anaerobic layers on the bottom rise to the top–as the ice melt releases the gas from the water, emitting a strong odor.

If you have a concern about a pond odor, please contact the owner or manager of the pond. Pond managers can help to reduce this issue by using an aerator to bubble air into the lower portions of the pond. This makes oxygen available for living organisms and leaves some areas ice-free to prevent hydrogen sulfide gas from accumulating. Pond managers will also have more insight as to whether the odor is caused by these natural oxygen variations or by a different issue that calls for further sampling and investigation.