The J. Evan Goulding District of the Year Award was established by the Special District Association of Colorado (SDA) to single out a district that demonstrates exceptional leadership, community spirit, and selflessness. This award recognizes a district’s major accomplishments, series of outstanding efforts, and a steady determination to serve their constituency. The 2015 winner, Eagle River Water & Sanitation District, exemplifies these qualities. 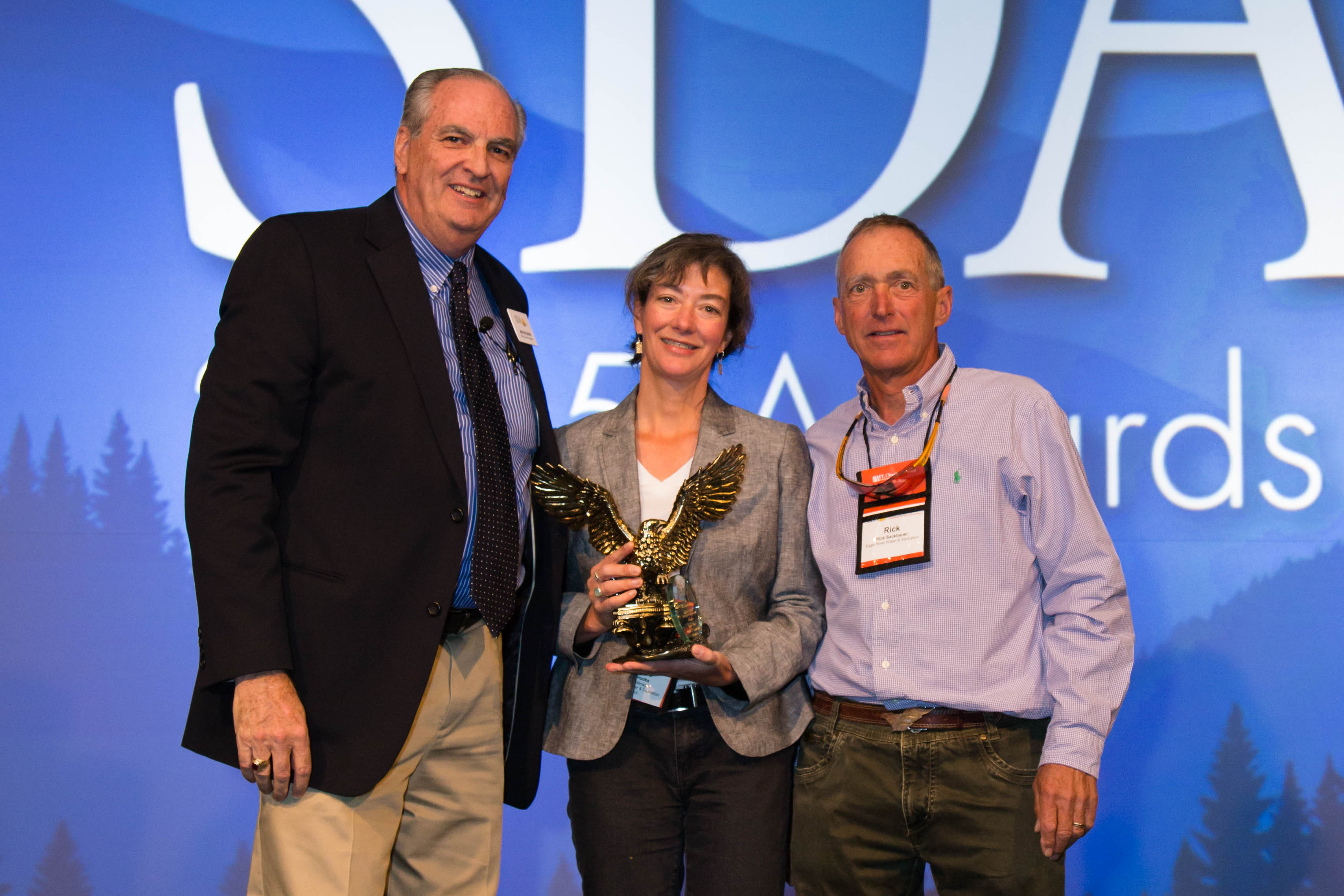 Eagle River Water & Sanitation District is responsible for regional water and wastewater operations in a service area encompassing approximately 54,400 acres in Eagle County, Colorado. While the district’s permanent population is approximately 27,000, during peak seasons (winter and summer) the population exceeds 55,000 due to the influx of visitors and part-time residents for recreation and tourism purposes.

ERWSD is perhaps the best example in the state of both formal and functional consolidation, geared to achieve greater effectiveness and efficiency. Starting in 1962, when Vail was created out of sheep pasture, six water districts and two sanitation districts went through a series of consolidations to form ERWSD. At the same time, down-valley, eight metropolitan districts formed the Upper Eagle Regional Water Authority by inter-governmental agreement. The Authority is fully managed and operated through contract with ERWSD, and its 100 employees … together providing water and wastewater treatment to the 55,000 persons served during peak season.

In addition, ERWSD has the most complex water distribution and wastewater collection systems in the state. The district has some 50 water storage tanks, three drinking water plants, 18 wells, 44 booster pump stations, 73 pressure zones, thousands of fire hydrants, valves, and manholes, nearly 500 miles of water and sewer main, and three wastewater treatment facilities that operate in a coordinated manner. This complexity means more mechanical systems and facilities to maintain and operate, but it also affords the district amazing flexibility to manage and optimize their system for reliability, drinking water quality, energy use, and stream flow impact.

ERWSD has a long history of establishing successful working relationships with the water community, other governmental organizations, and elected officials. In the 1990s, the district helped to bring together local, state, and federal government representatives to address sediment problems on Black Gore Creek, upstream of the town of Vail. The district remains active in the group. Similarly, in 2011, the district spearheaded work on the Gore Creek Water Quality Improvement Plan, which the town of Vail is now using to implement a strategic action plan to improve water quality in Gore Creek. ERWSD has also worked with the Colorado Department of Public Health and Environment to find a solution that will allow the district’s three wastewater treatment facilities to best meet nutrient regulations customized to alpine streams. It also secured the water right that allowed for the creation of the Vail Whitewater Park, which launched what is now known as the Mountain Games.

In 2013, the district worked with their (then) State Senator to develop Senate Bill 13-019 (Concerning the Promotion of Water Conservation Measures). This legislation grew out of the district’s outreach efforts during the 2012 drought to partner with other entities to reduce water use for the benefit of local waterways and the community’s recreation and tourism based economy. In the future, the legislation will allow water rights holders to reduce water use during drought without potentially jeopardizing their historic consumptive use calculation. ERWSD also maintains regular contact with local elected officials and has been heavily engaged in the Colorado Water Plan process.

Eagle River’s current approach to water demand management includes the major goal of putting technology in the hands of their customers so that they can contribute to the overall goal of efficient use of water resources. To this end, the district has plans to install advanced metering infrastructure which includes changing out 10,000 meters, erecting radio towers, and purchasing new software, steps that could take up to five years to finalize. This new technology will allow the district to provide more immediate feedback to their customers on their water use and to alert them if they are approaching the limit of their water budget. The district will begin establishing these water budgets in 2016, with full implementation expected in four to five years. The district is also developing water service agreements for new developments that will encourage water-efficient design by calculating how much water a new development should reasonably use and will then charge the developer an impact fee based on that usage.

SDA presents the J. Evan Goulding District of the Year award annually, and this year’s presentation took place during the SDA Annual Awards Luncheon as part of the SDA Annual Conference which was held September 23-25, 2015 in Keystone, Colorado.

Ann Terry, SDA’s Executive Director, was pleased to recognize the exceptional work of the district. “The dedicated staff and Board of Directors of Eagle River Water & Sanitation District work tirelessly to accomplish what’s best for the community as a whole while maintaining their role as a leading steward of one of the state’s most vital resources. We are honored to present them with this award.”

The Special District Association of Colorado is a statewide membership organization created in 1975 to serve the interests of the special district form of local government in Colorado. Special districts fill a vital role in providing many of the basic services and public needs of the people of Colorado, including fire and rescue services, water and wastewater treatment and delivery, parks and recreation amenities, hospitals, libraries, and cemeteries. SDA has over 1,520 district members and close to 250 associate members.